Before I go on my rant about how I ended up with MacBook Pro paperweight overseas, let me just get to the punchline here and explain why the MacBook Pro warranty sucks.

We all know why MacBooks are so expensive… the tight knit integration between the hardware and software of all Apple products is unmatched in the consumer electronics industry. One must pay a premium to own one of these supremely designed masterpieces.

But with such tight control over its products, you are immediately locked into the Apple ecosystem.  This is true even if you just own a single Apple product.  Let me explain.

When you buy a MacBook Pro, you get an Apple one year limited warranty.  It’s not a question of what the Apple warranty covers, but rather WHY ONLY 1 YEAR?

If something breaks, Apple is literally the only entity capable of fixing it.  There’s no DIY option.  Apple will fix it for free within one year of purchase, but after a year, guess who’s paying the bill?

You can pay $350 plus tax for an AppleCare warranty and extend your Apple one year limited warranty to three years. But you already paid thousands of dollars for your MacBook Pro. Why should you have to pay an extra $350? I mean, you don’t have to, but if you don’t, then when your logic board craps out 18 months in, you’re gonna have to fork over close to a grand to get it fixed.

Apple should warranty their products for 3 years minimum for free.

Whatever the case may be, an Apple one year limited warranty is not a sufficient warranty for such an expensive, exclusive piece of technology such as the MacBook Pro. 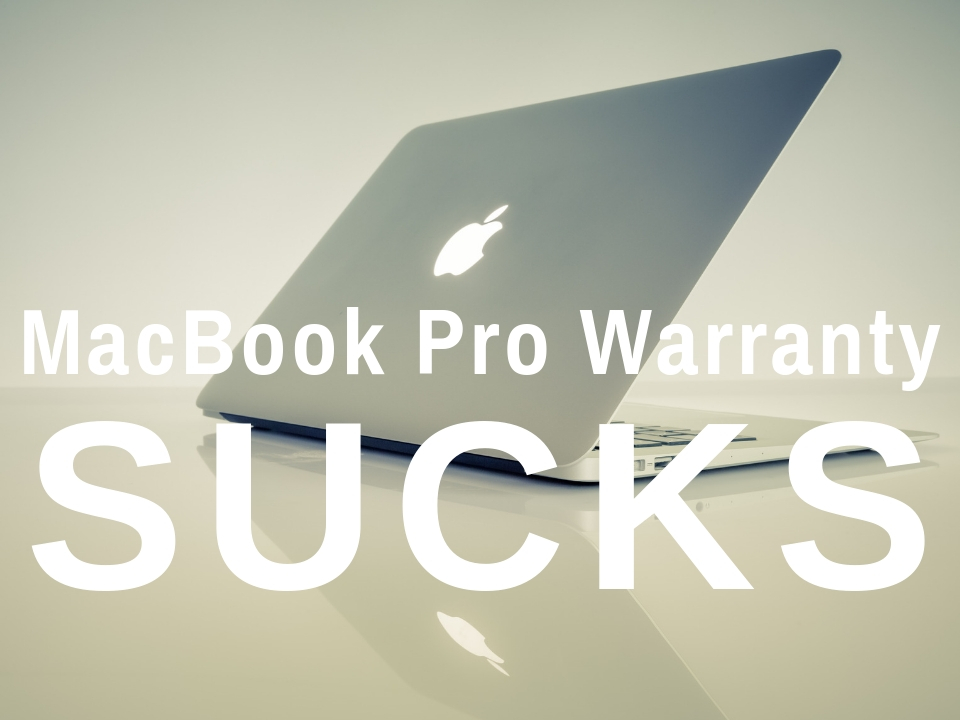 Once You Go Mac You Never Go Back. Or Do You?

For the longest time, I swore that I’d never buy an Apple product. Why would I? I could get a Window’s laptop for a fraction of the price with twice as good specs.  I have a masters degree in computer engineering, so I certainly know a thing or two about computers.

But as my dependency on a reliable terminal grew, so did my hatred for Windows. Naturally, I switched over to Linux for a while, but didn’t have the patience to use it as a personal computer.  I wanted a computer and operating system that just, well… worked.

I could no longer ignore the fact that Apple has a reputation for building products that just, well… work.  So I caved in and forked out $2,099 for a brand new MacBook Pro in May 2018.  I had officially made the switch from Windows to Mac. There was no turning back.

Pissed off in Peru

With a brand spanking new MacBook Pro in hand, capable of churning out 4K videos, I decided to start a daily vlog on YouTube.  I documented quitting my job, traveling to Bermuda and central Europe, and finally my infamous trip to South America.

Everything went smoothly during the first two weeks in Colombia. I was quickly approaching 150 daily vlogs when I decided to pre-record a week’s worth of vlogs before heading into the Amazon where I wouldn’t be able to upload.

As I was floating down the Amazon on a river boat, stretched out on my hammock, I opened my MacBook to do some video editing and I got an error message that prevent me from using my computer.

I was days away from civilization, so I packed away my MacBook Pro and figured I’d reinstall macOS then.  Days later, I did just that, but the problem persisted. I tried every trick in my toolbox. Nothing worked.

I called up Apple in the United States. After 2 hours on the phone with them they told me to go to an Authorized Apple Repair Service Center in Lima, Peru.  Hopeful the next day, I did just that.

Pissed off at this point, I called up my senior technical advisor from Apple in the US again.  Five more hours on the phone with her without any progress.  There was no option to ship to the US, expedite the repair in Peru, or loan me a MacBook Pro so that I could continue my vlogging. I would have to wait until I get back into the United States to have my MacBook Pro repaired. Defeated, this is exactly what I did.

Back in the United States, I took my MacBook Pro to an Apple store. They shipped it off to a repair center. Three days later, FedEx delivered my repaired MacBook Pro with a replaced logic board.

Although I had a working computer again, I was still fed up with the whole situation.  I couldn’t ignore the fact that I had a new logic board, but the one year warranty didn’t reset. In other words, I feel that if such a critical part is replaced like the logic board, the warranty should be extended one year from the time of repair.

I expressed my concern to Apple customer relations via email and over the phone.  The best they did for me was suggest that I purchase AppleCare coverage which would extend my warranty fro 1 year to 3 years from the date of purchase.

I considered purchasing AppleCare until I found out that it costs $350 plus tax.  Again, I strongly feel that Apple should warranty all of their products for a minimum of 3 years for free.  Not doing so puts the customer in a situation where they must essentially gamble—pay now for coverage or pray that you don’t have a bad apple.

The senior technical advisor from Apple who was working my case couldn’t give me a discount on AppleCare. I asked if there was something else she could do for me to help me regain trust in Apple. She said no.

I still use my MacBook Pro on a daily basis. I love it, but don’t consider me an Apple fanboy.  After my experience, I partially regret making the switch to Apple. I wrongfully assumed that Apple would take care of its customers.

Bottom line:  Apple should warranty their products for 3 years minimum for free.

If you’re considering purchasing a MacBook Pro, other Apple product, or any piece of expensive technology, I strongly suggest you evaluate wether the warranty is sufficient.  As you know, in my opinion, the Apple MacBook Pro warranty sucks.