Even if you didn’t watch the Rio Olympics in 2016, you’ve probably seen Michael Phelps cupping pictures. You know, the images of Phelps with those purple dots all over his body—they kind of look like giant hickeys.

Most of the world along with you and I wondered the same thing—what’s up with these cupping bruises on Phelps? Let’s find out more about cupping and Phelps below. 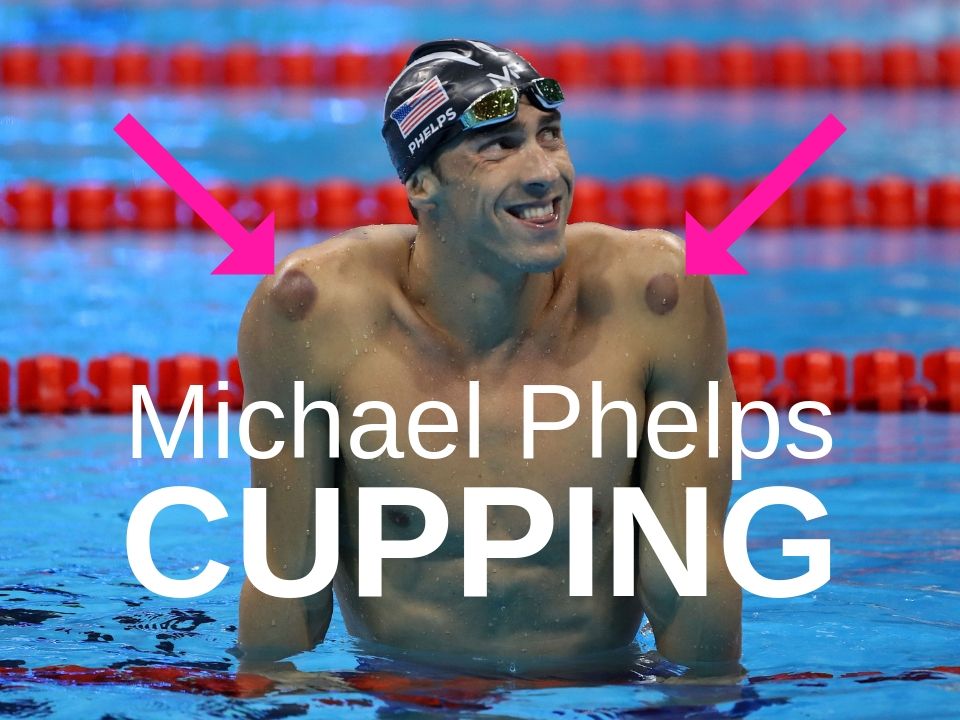 Just before retiring, the greatest swimmer of all time, Michael Phelps, adopted a traditional Chinese recovery technique called cupping. Michael Phelps began cupping several months before the 2016 Olympics, but it wasn’t until Rio that the world was exposed to this practice.

Cupping bruises that look like purple dots were seen on the shoulders and back of Phelps and some of his teammates in Rio de Janeiro.

Phelps certainly wasn’t the first one to cup. Although relatively new to the swimming world, cupping has been used across many sports including track, baseball, and gymnastics.

Today, you can find swimmers cupping on pool decks of most national and international competitions as well as college and even high school swim meets.

Cupping therapy for athletes has taken off in the recent years, but how exactly does cupping work, and what advantage does it give athletes?

Basically, heat is applied to the air inside a glass cup. The open-top side of the cup is immediately placed on the skin of the athlete, and the resulting vacuum partially sucks the skin into the cup. The idea here is that by separating the skin from the muscle and/or bone via suction, more blood will flow to this area. Consequently, the increased blood flow is thought to help the athlete recover faster.

In addition to assisting in the general recovery of an athlete, cupping is used for targeted pain relief of muscle knots or tight muscle areas.

One advantage of cupping is that it is decompressive in nature rather than compressive. While a traditional massage applies a pushing force to the muscles, cupping involves pulling.

Regardless of the intended use of cupping, an increased blood supply to a specific area of the body only seems beneficial. An athlete that practices cupping must have an advantage over an athlete that does not cup. Perhaps this is true, but let’s first look at the science behind cupping.

If Phelps was cupping at the world’s biggest swimming competition, there must be a real physiological benefit to cupping, right? Unfortunately, there is not much scientific research that supports or discounts cupping. Because it is a practice that has not been extensively researched, cupping is still considered pseudoscience.

While there appear to be no cupping risks other than the obvious potential burn, the short term and long term side effects of cupping haven’t yet been fully studied. At the very least, it seems like those nasty looking cupping bruises are only temporary.

Assuming there are no true cupping therapy dangers, what if cupping turns out to have no physiological benefit? Well, that’s okay actually. Many professional athletes swear that the placebo effect works like magic in sports. In other words, if the theory that cupping speeds up recovery is false, as long as athletes think they are recovering faster, there is a psychological benefit.

So although there isn’t much cupping research into the physiological benefits of cupping, a placebo benefit might be just as powerful.

While cupping therapy involves fire, it is not the heat that leaves bruising on the skin but rather the pulling and stretching of the skin and fascia. The bruises from cupping is only temporary. Cupping bruising generally lasts anywhere from a couple days to a couple weeks. 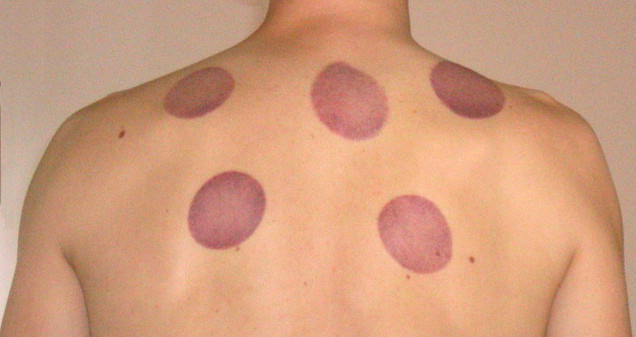 Cupping massage bruising is the result of pulling toxins to the surface of the skin. Just below skin level, these toxins are metabolized quicker than they would be metabolized deep down. By removing these toxins, fresh oxygen, blood cells, and nutrients will replenish the muscles, and therefore theoretically heal the body quicker.

Furthermore, these cupping marks are technically not bruises. Bruises are caused by trauma and generally hurt. Cupping does not cause any pain or discomfort

What are your thoughts on cupping? As a former competitive swimmer myself, I know I’d certainly give it a try. Would you? Let’s discuss cupping in the comments below.

Want more? Check out some of my other swimming blog posts here.