You’ve probably heard of Michael Phelps, the most decorated Olympian of all time—28 Olympic medals, 23 of which are gold medals. A lot of people claim that he has the perfect body for swimming fast and efficiently. Perhaps most noteworthy is Michael Phelps’s height and wingspan.

What is Michael Phelps wingspan, and did it really give him an advantage when swimming competitively? Let’s find out below. 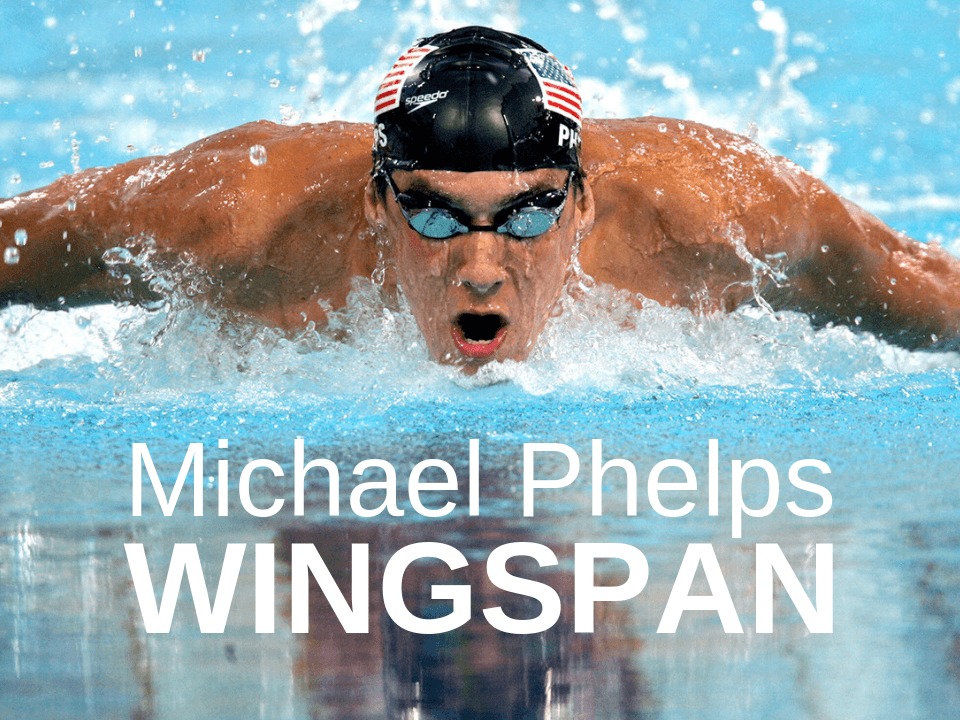 Michael Phelps’s wingspan is 6 ft 7 in. Wingspan is measured from fingertip to fingertip with arms parallel to the ground.

While Michael Phelps has a wingspan of 6 ft 7 in, he “only” stands 6 ft 4 in tall. As a result, Michael Phelps’s arm span is 3 inches longer than he is tall. Those are certainly some long arms.

Michael Phelps has a wingspan to height ratio of 1.04. You can calculate this number by simply dividing Phelps’s wingspan by his height.

At the time of this writing, the second most decorated male Olympic swimmer is Ryan Lochte. Lochte has a wingspan to height ratio of 1.07.

Therefore, Lochte and Phelps both have a longer wingspan vs height. While it seems like this is a common trait for fast swimmers, the truth is that most humans are built this way. In other words, Phelps doesn’t have a wingspan and height correlation much different than your average person.

While Michael Phelps has a wingspan that is 3 inches longer than he is tall, this is not statistically significant when considering the average adult made has an arm span that is 2 inches longer.

In other words, it’s unlikely that Michael Phelps’s arm span alone gives him much of an advantage over other swimmers.

If it wasn’t Michael Phelps’s wingspan that gave him an advantage in the water, what was it?

As a retired competitive swimmer myself, my best guess is that a variety of factors, both physical and mental, that allowed Phelps to dominate in the water. His love of swimming in combination with his strength, discipline, and technique allowed Phelps to win so many races.

That being said, technique is unbelievably important in competitive swimming. In addition to great pulling power, you want to be as efficient as possible.

When one of my former college teammates asked Michael Phelps for his number one piece of advice for swimming fast, Phelps said to “hold the water”.

Straight from the mouth of the world’s best swimmer himself, technique is critical. You might have the “perfect” swimmer’s body and be able to do 100 pull-ups, but if you don’t have the proper swimming technique, your strokes will be inefficient.

Are you a competitive swimmer? Do you know what your wingspan is? My wingspan is 6 ft 1 in and my wingspan to height ratio is 1.03. What’s yours?

Want more? Check out some of my other swimming blog posts here.