A 128-room boutique hotel allows guest from all over the world enjoy the self-proclaimed “Greatest City in America” in luxury. In fact, you don’t even have to be a guest at the hotel to enjoy its many amenities.

Here are 15 excellent reasons why you should visit the Sagamore Pendry in Baltimore. 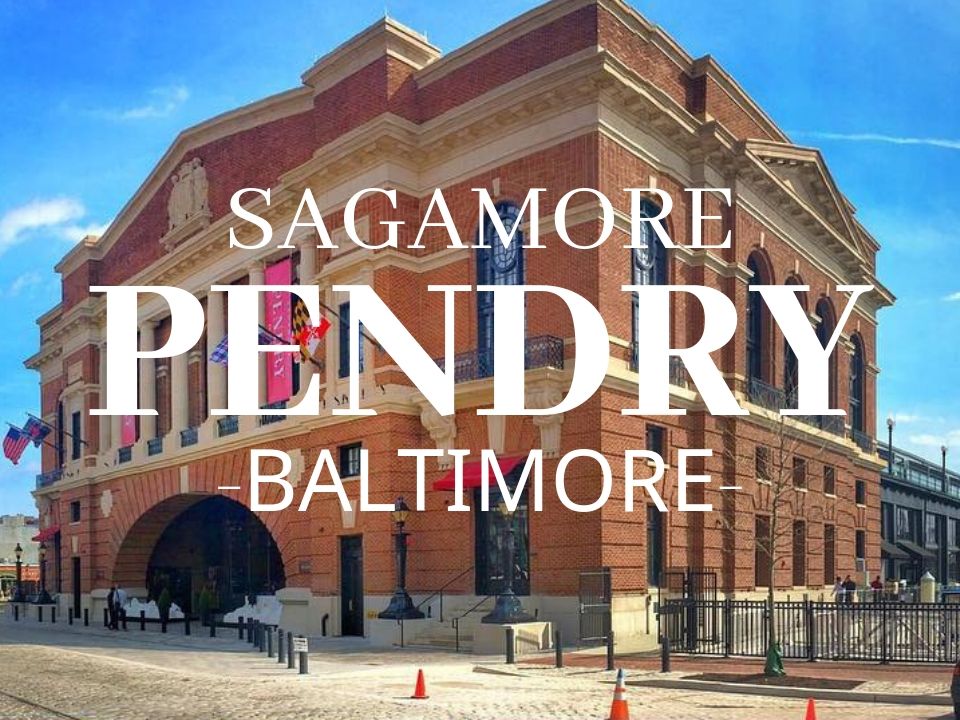 Condé Nast Traveler Readers’ Choice Awards named Sagamore Pendry Baltimore the best hotel in the U.S. in 2018 with a near-perfect score of 99.11/100. This was a fantastic honor for the Pendry Baltimore hotel which only opened its doors in March 2017.

Located at 1715 Thames St, a famous cobblestone street in Fell’s Point, the Sagamore Pendry hotel stands within arms reach of many important icons in American history.

Just across the harbor is Fort McHenry where in 1812 Francis Scott Key wrote The Star-Spangled Banner.

The famous writer Frederick Douglas, who caulked ships during the 1820s and 1830s, lived and worked in Fell’s Point. Douglas eventually escaped slavery and fought in the abolitionist movement.

Billie Holiday, a jazz singer, resided in a row home a few blocks away from the Pendry Hotel in Baltimore.

More recently, the most decorated Olympian with 28 Olympic medals, Michael Phelps, lived in a 4,080-square-foot condo in Baltimore’s historic Fell’s Point while training for the Olympics.

3. Damn Close to the Inner Harbor

Tourists come from all over to explore the Baltimore Inner Harbor. Restaurants such as Dick’s Last Resort, Fogo de Chão, and The Cheesecake Factory line the waters of the Inner Harbor.

Walking distance from the Inner Harbor is Camden Yards, home of the Orioles, and M&T Bank Stadium, home of the Ravens.

On the opposite side of the Inner Harbor is Federal Hill, an important historic area during the Battle of Baltimore and the Civil War, that is now a place where tourists flock to capture the perfect photo of the Baltimore Inner Harbor for Instagram.

You’ll find touches of Baltimore charm and history throughout the Sagamore Pendry hotel.

The closing lines of the The Star-Spangled Banner, which was written not too far from the Pendry Baltimore, is one of the first things you’ll notice as you walk into the hotel. 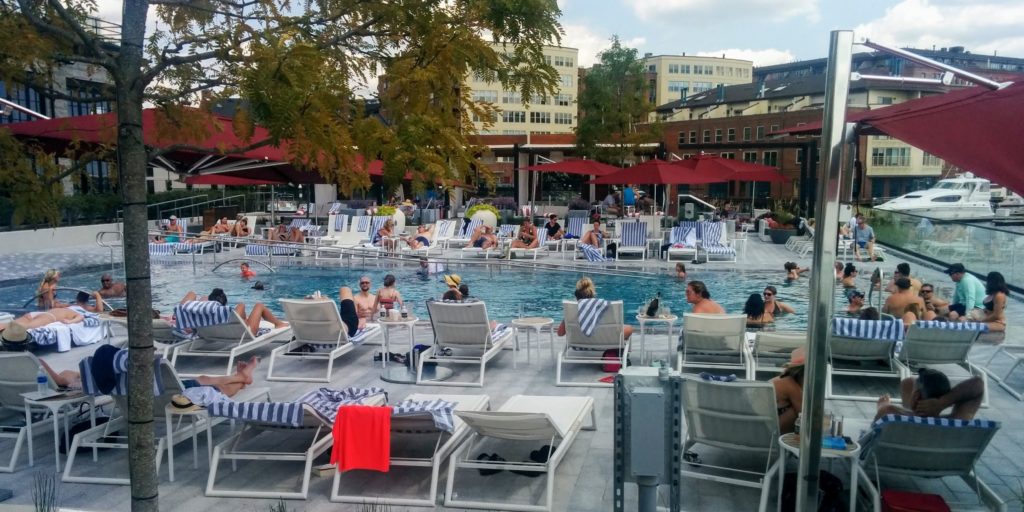 The Sagamore Pendry pool in Baltimore is located at the edge of Recreation Pier and offers some of the best views of the harbor and city skyline. While guests at the hotel can visit the pool for free, visitors can purchase a day pass for $50 Monday through Friday.

There is also a pool bar that serves cocktails, beer, and food from the grill.

Sagamore Pendry Baltimore’s 24-hour fitness center consists of strength and cardio equipment. This means you won’t have an excuse not to workout during your travels.

You’ll find kettle balls, free weights, and medicine balls in a variety of weights in addition to ellipticals, treadmills, and stationary bikes.

The Sagamore Pendry Baltimore has partnered with The Healing Path Massages + Wellness for all your relaxation and revival needs. Located less than a block from the hotel, you can treat yourself to a massage, facial, or other type of body treatment. Some of these services are even available to arrange in your hotel room.

A minibar stocked with Maryland snacks such as Utz Old Bay potato chips and Kinderhook mixed nuts as well as beer including Heavy Seas, Flying Dog, and National Bohemian, are just some of the charm you’ll find in your Sagamore Pendry Baltimore hotel room.

Guest rooms are modern and sophisticated with mahogany and brass accents. Floor-to-ceiling windows allow you to see the courtyard, harbor, and pool depending on which room you choose. There are eight different types of rooms at the Pendry hotel Baltimore, some with balconies.

In addition to a minibar stocked with Maryland favorites, suites at the Sagamore Pendry feature 700+ square feet of accommodation. You can expect separate bedrooms and luxury bathrooms.

There are five different types of suites at the Sagamore Pendry Baltimore hotel, all of which have 24 hour room service.

On the menu, you’ll find purebred beef, seafood, farm-raised poultry, and, of course, homemade pasta. Be sure to save room for tiramisu, cheesecake, or gelato for dessert. The Rec Pier restaurant serves breakfast, lunch and dinner.

You can check out the menu here ahead of time.

The Cannon Room, which was named for the 18th-century cannon that was found during construction of the hotel, is an American whiskey bar. The cannon is now on display just a few steps from the bar.

Another highlight of the Cannon Room is Sagamore Rye, a locally crafted whiskey of Kevin Plank.

The Sagamore Distillery is located a short 15 minute ride from the Sagamore Pendry. Both of these companies are owned by Under Armour CEO Kevin Plank. You can arrange with concierge at the hotel for a tour of the Sagamore Spirit Distillery.

The distillery opened in Baltimore in April 2017, just a month after the hotel opened. All six of the distillery’s whiskeys are available at the Pendry hotel Baltimore.

The Sagamore Pendry Baltimore is pet friendly.  Guests are allow up to two pets of any size for an additional fee. This means that you don’t have to get a dog sitter for Bella and Buster. 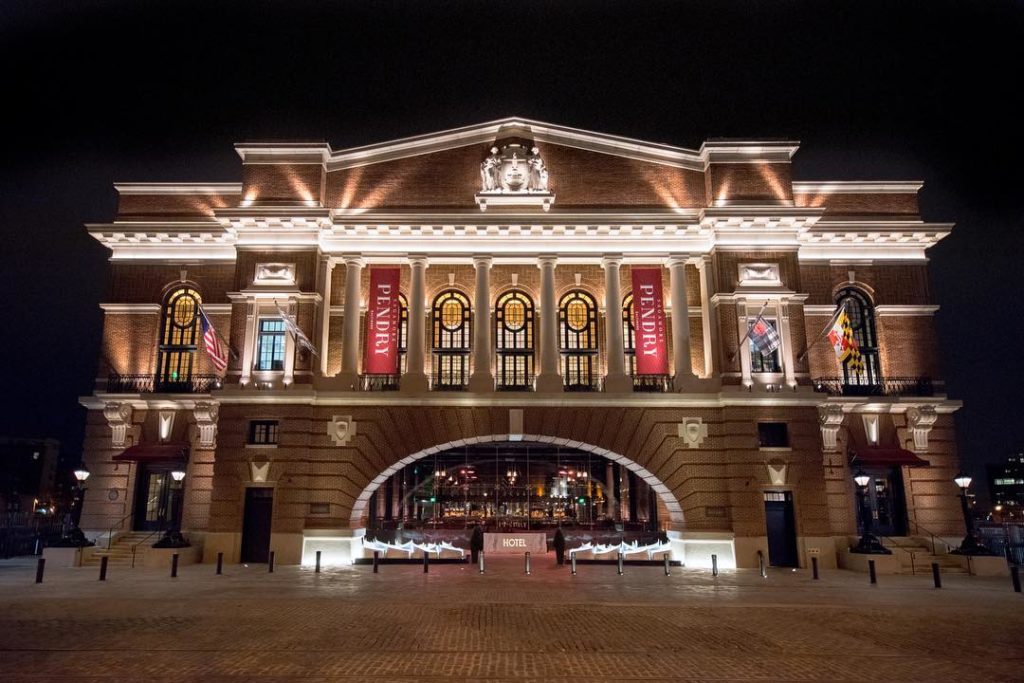 I lived in Baltimore for close to a decade, and I love this charming little city. Consequently, I’ve written a few Baltimore blog posts that you should check out. And if you have a minute, drop a comment below, especially if you are a Baltimore native or are planning on traveling to Baltimore.