Ever wondered what is the most money you can win in one game of Jeopardy? The answer is a staggering $566,400! In contrast, the current record for the most money won on Jeopardy in one day is $131,127 set by James Holzhauer on April 17, 2019.

How is it possible that there is such a large difference between the most money won on Jeopardy in one day and the most you can win in one game?  Let’s explore this question and find out why. 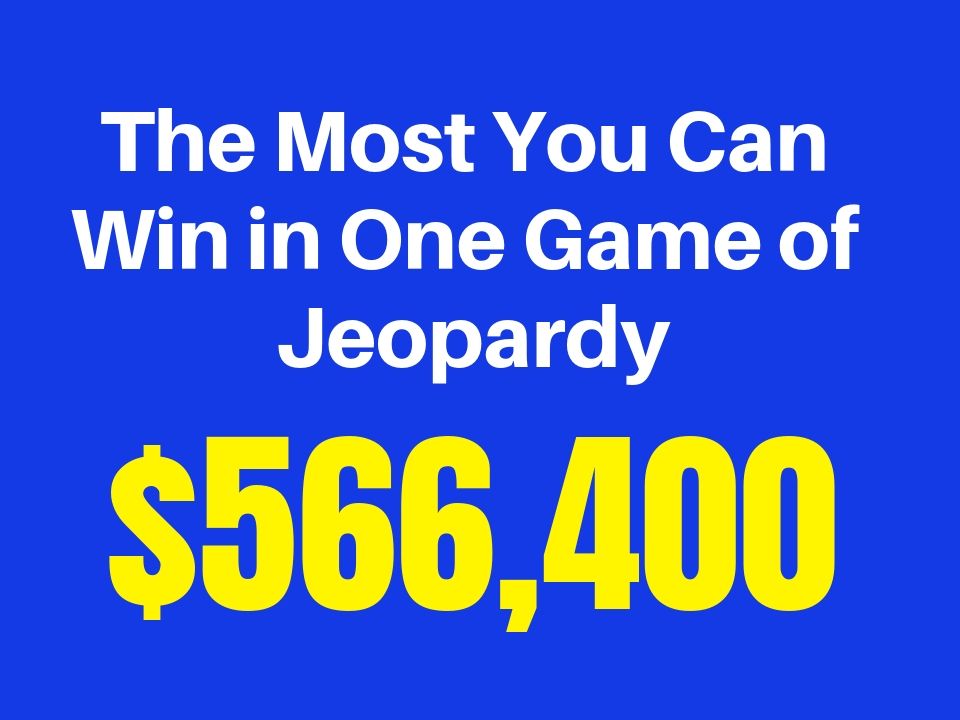 By now we know that the highest Jeopardy score possible in one game is $566,400. Due to reasons that we’ll get into, this score has never been achieved.

Rather than speculate, let’s walk through each round and do the math. There are 3 rounds to the game of Jeopardy.

As a result, at the end of the first Jeopardy round, the contestant can theoretically win a maximum of $35,600.

Pin
The second round of Jeopardy is called Double Jeopardy.  Hence, clues are worth twice as much in this round ranging from $400 to $2,000.  Therefore, the board has a total value of $36,000.

There are two Daily Doubles in this round.  Consequently, the player has two opportunities to double his score.  Again, to maximize winnings, the Daily Doubles must exist under $400 clues and the player must select both of these clues last.

When we add the player’s winnings from the first round to the value of the board less two $400 clues, we determine the maximum winnings before any Daily Double clues to be $70,800.

Furthermore, the first Daily Double in the Double Jeopardy round will yield the player $141,600 if he wagers everything and answers correctly.

Likewise, a true Daily Double and a correct answer for the final clue will double the player’s winnings to $283,200.

Therefore, assuming a perfect first and second round of Jeopardy, the contestant can theoretically win a maximum of $283,200 by the end of the Double Jeopardy round.

The Final Jeopardy round features a single clue.  This is the last chance for the contestant to double his earnings. As long as the contestant wagers his entire winnings and answers the question correctly, he will double his winnings yet again.

What Is the Maximum Amount of Money You Can Win on Jeopardy?

The most money you can win in a single episode of Jeopardy is $566,400. This requires a great deal of skill and, above all, luck. The player must:

Above all, the main reason a player can theoretically win $566,400 in Jeopardy is thanks to the four opportunities that he has to double his winnings—three Daily Doubles and one Final Jeopardy.

Additionally, the player must be extremely smart to answer every question correctly. Even if he knows the answer to every question, he must ring-in first which is a skill by itself. It’s actually okay if the player fails to ring in first as long as whoever rings in first answers incorrectly.

Assuming the stars are alined, it is theoretically possible to win over a half million dollars in a single game of Jeopardy. But I’d wager $0 on that happening, Alex.