Although considered controversial to some because of rude and offensive references and slogans painted on the exteriors of its camper vans, Wicked continues to grow and thrive.

Read on below for a complete list of Wicked Campers locations around the globe. 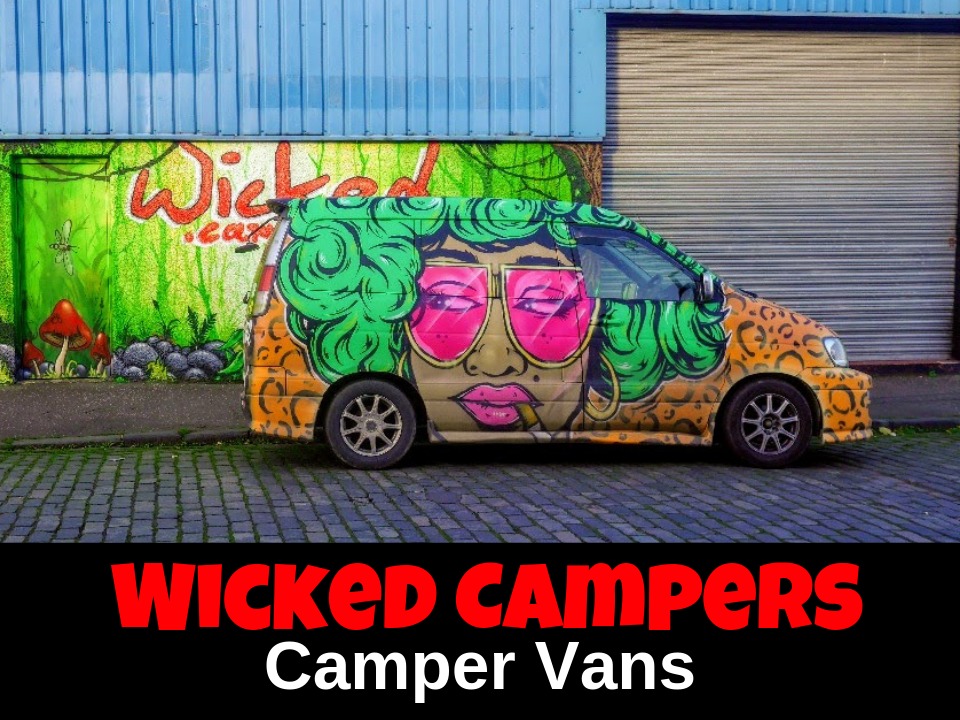 With fourteen locations across Australia, Wicked has the most camper van rental locations of any country. Since it was founded in Australia, it’s no wonder this is the case.

After exploring the Great Ocean Road in a free camper van, I’ll be the first one to tell you that seeing Australia in a camper van is the best way to do it. Unfortunately, most camper van rentals are expensive. However, it seems like this company has a strong footing in the Australian camper van rental market as a budget friendly options for backpackers and locals alike.

Located ideally along the coast of South Central Australia, Adelaide is the gateway to Perth, Alice Springs, Melbourne, and beyond.

Flying into Sydney and thinking about heading out to the Great Barrier Reef? Drive a camper van from Sydney to Airlie Beach in the Whitsunday region of Queensland.

You can’t see the Australian outback and the famous Red Centre of Australia without a pit stop in historic Alice Springs. Wether you’re driving up from Adelaide or heading down from Darwin, Alice Springs is conveniently located halfway between these two Australian cities.

Located halfway between the Sunshine Coast and Gold Coast of Australia, you don’t want to miss the beauty and charm of this coastal capital of Queensland.

Although it’s located well over 1,000 miles north of Perth, you will probably find yourself in Broome if you dare to make the trip along the northwestern coast of Australia to Darwin.

Not too far south of Brisbane, Byron Bay is a popular beach town that is worth paying a visit to on your camper van trip up the east coast of Australia.

As one of Australia’s northern most cities, Cairns is popularly known as the gateway to Australia’s Great Barrier Reef.

A popular Australia camper van route is Adelaide to Darwin or Darwin to Adelaide. Although this trip will take you clear across Australia, you will experience the desert heat of central Australia as well as the tropical climate of North Australia.

All the way on Western Australia’s North West Cape, Exmouth is the gateway to Ningaloo Marine Park and your opportunity to see coral reefs, tropical fish, and pristine beaches.

Although Tasmania looks quite small on a map compared to mainland Australia, you will need at least a couple weeks to drive around the beautiful island of Tasmania in your camper van from Wicked Campers Tasmania.

Chances are that you’ll begin your Australia journey in either Sydney or Melbourne. If you start in Melbourne, your camper van route might take you up the east coast of Australia towards Cairns or west along the Great Ocean Road toward Adelaide and Perth.

As one of many small cities along the coast of Western Australia, you won’t leave Monkey Mia disappointed as you’re almost guaranteed to the famous bottlenose dolphins.

If you find yourself flying into Australia’s biggest airport in Sydney, this is a prefect city to begin your camper van adventure throughout Australia.

With four locations—two on the North Island and two on the South Island—a camper van from Wicked Campers NZ is probably the best way to experience New Zealand. As you might imagine, New Zealand has a seemingly endless plethora of natural beauty just waiting for you to explore.

While Auckland is New Zealand’s largest city, you probably won’t want to spend too much time here… there’s just so much natural beauty waiting for you outside the city. Since you will most likely be flying into Auckland, Wicked has a convenient Auckland location that you can rent your camper van from.

While Christchurch is located on the east coast of the South Island, this New Zealand city is a prefect starting off point for your New Zealand camper van road trip.

Although Wellington is the capital of New Zealand, the population is only an eighth of Auckland and is a fantastic city to spend a few days exploring.

Known as the adventure capital of the world, you will probably find yourself at least passing through Queenstown if you plan on bungee jumping or skydiving in New Zealand.

Wether your plan on road tripping through all of Europe or want to take it slow in a single country, Wicked has you covered with eight European locations.

As a result of it being located less than three miles from one of the top 15 largest airports in the world, Wicked is ideally located for your European camper van adventures.

You could probably spend months traveling through Spain alone, and it’s for that reason that Wicked Camper’s has a Barcelona location for you to rent a camper van.

Wether you want to visit Ireland to drink beer or to visit a castle or two, Dublin is the place to pickup your camper van for touring all of the United Kingdom.

London will probably be your starting off point for your camper van trip around the United Kingdom.

Another great location to rent a camper van in Spain is the port city of Malaga. Wether you’re planning on going north to Madrid or venturing across the Strait of Gibraltar to Africa, Malaga is a great place to spend a few days.

As the only Wicked location, Munich is a perfect place to start your German or European camper van road trip as it’s ideally centrally located and close to a major international airport.

What better way to see Italy than by camper van? Wether you head down to Naples or up to Milan, your Italy camper van adventure won’t leave you disappointed.

In addition to having two South African locations, Wicked also has locations in Botswana and Namibia. Most of all, you can choose from a simple two seater or a five seater in order to accommodate everyone.

While Cape Town might be your kicking off point, you will have a lot of ground to cover on your South African camper van adventure.

It’s now possible to camper van through Botswana with Wicked. Wether you plan on driving into Namibia or South Africa, Gaborone is a great place to start your road trip.

A proper South African camper van road trip will take you through Johannesburg, and what better way to see this natural beauty of South Africa than in a Wicked van.

As the capital of Namibia, Windhoek is the perfect starting-off point for your Namibia, Botswana, and South Africa camper van itinerary.

While the only Wicked location in Asia is located in Tokyo, Japan, this should not stop you from road tripping down to Osaka and Hiroshima.

Wether you’re more interested in the modern side of Tokyo or the ancient history, a camper van is a fantastic way to explore Tokyo and beyond.

Although Canada is a huge country, the best way to see it is to get up close and personal. What better way to do so than in a budget friendly camper van?

Calgary to Vancouver to Montreal in a camper van? It’s been done. Now it’s your turn. Rather than spend thousands on a rental car and hotels, the best way to see Canada and the US is in a camper van.

If you have time on your hands, a great way to explore everything in between Ottawa, Toronto, and Quebec is in a camper van from Wicked. For the bold, an adventure through New England and down into New York City awaits you.

Wether your plan to start in LA and drive to Vancouver or vice versa, Wicked has a location in Vancouver for your next camper van trip.

With only one location in the entire United States of America, Wicked Campers LA is your only option for a budget camper van in the US.

Considering how expensive California is, a budget friendly way to see this beautiful state is with a camper van. Wether your camper van route takes you to the Grand Canyon or Las Vegas, Wicked has you covered.

It seems like the country of Chile stretches the entire west coast of South America. Because this country is so narrow, a great way to experience it is in a camper van from north to south or vice versa.

As the northern most Wicked location, Arica might be a perfect starting-off point for your road trip down through Chile.

Wether you plan to start your camper van trip there, or just pit stop at the casino, Iquique is a stop on your Chile road trip that you don’t want to miss.

You don’t want to miss Puerto Varas in southern Chile’s Lake District. Located off of Lake Llanquihue, Puerto Varas has stunning views of the Osorno and Calbuco Volcano.

If you’re planning on backpacking Patagonia, you’ll probably find yourself in Punta Arenas, a city on Chile’s southern tip.

Another must-see in Chile is San Pedro de Atacama, a town in the Andes mountains of northeastern Chile that varies from desert to salt flats and volcanoes to geysers and hot springs.

Chances are that you’re either starting or ending your Chile camper van trip in Santiago. Santiago is not only Chile’s capital city, but it’s also Chile’s largest city.

Although no locations exist at the time of this writing, Wicked Campers Peru is in the works. This is going to open a window of camper van opportunities throughout Peru. My guess is that the first location will be in Lima or Cusco. Stay tuned for more on this in the near future!

Wether you’re planning a camper van holiday abroad or want to convert your own cargo van into a camper, check out some of my other #vanlife blog posts here.

Also, if you have any questions about renting a camper van, let me know in the comments below.